The Importance of History

History fires pupils’ curiosity about the past in Britain and the wider world. Pupils consider how the past influences the present, what past societies were like, how these societies organised their politics, and what beliefs and cultures influenced people’s actions. As they do this, pupils develop a chronological framework for their knowledge of significant events and people. They see the diversity of human experience and understand more about themselves as individuals and members of society. What they learn can influence their decisions about personal choices, attitudes and values.

In history, pupils find evidence, weigh it up and reach their own conclusions. To do this they need to be able to research, sift through evidence, and argue for their point of view – skills that are prized in adult life. 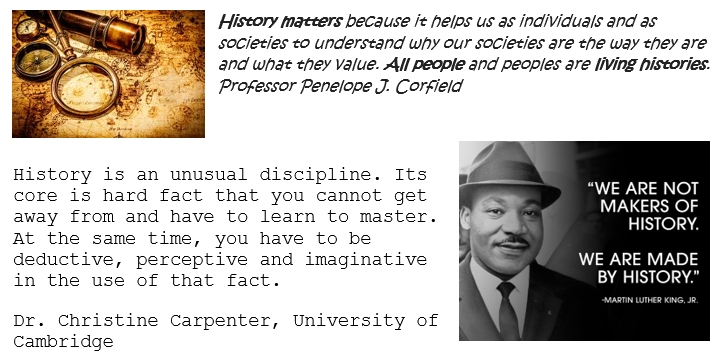 Purpose of Study - A high-quality history education will help pupils gain a coherent knowledge and understanding of Britain’s past and that of the wider world. It should inspire pupils’ curiosity to know more about the past. Teaching should equip pupils to ask perceptive questions, think critically, weigh evidence, sift arguments, and develop perspective and judgement. History helps pupils to understand the complexity of people’s lives, the process of change, the diversity of societies and relationships between different groups, as well as their own identity and the challenges of their time.

Aims - The national curriculum for history aims to ensure that all pupils:

Unfortunately not the ones with chocolate chips.

Some cookies are necessary in order to make this website function correctly. These are set by default and whilst you can block or delete them by changing your browser settings, some functionality such as being able to log in to the website will not work if you do this. The necessary cookies set on this website are as follows:

Cookies that are not necessary to make the website work, but which enable additional functionality, can also be set. By default these cookies are disabled, but you can choose to enable them below: